Tomorrow night and on Wednesday, March 14, MTT, Joan La Barbara, Meredith Monk, and Jessye Norman will stage John Cage’s Song Books.  They will be joined by several SF Symphony musicians, a few miniature houses, some fruit, a blender, a typewriter, card games, and electronic musician Jesse Stiles on stage. (There were so many unusual props sitting around – including food – that we accidentally polished off a few grapes – whoops – before we realized they were meant to be eaten on stage.) The work will also be performed in Ann Arbor on March 23 and at Carnegie Hall in New York on March 27. Dress rehearsal today looked a little something like this: 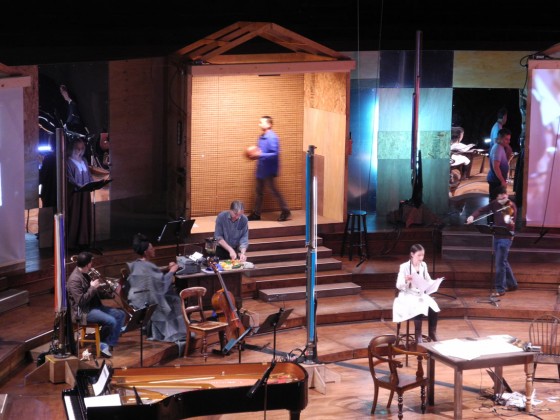 In this video, Jesse Stiles describes how he will be participating in Saturday (3/10)  and Wednesday (3/14)’s performances by processing the singers’ voices through an electronic interface he designed.