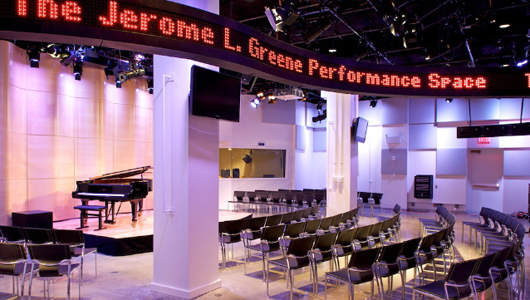 On Monday, March 26 at 4 pm PDT/7pm EDT, Michael Tilson Thomas, John Adams, Meredith Monk, the St. Lawrence String Quartet, and Jeremy Denk visit hosts David Garland of WQXR and Nadia Sirota of Q2 for a live studio event and webcast at New York’s  Greene Space  to launch the American Mavericks Festival in New York. They’ll be discussing the music of Charles Ives and the other Mavericks, including John Adams himself.  Watch and listen here at 7 pm Eastern/4 pm Pacific on Monday.

The Greene Space is the brick-and-mortar home of New York’s public radio programs.   Located on the ground floor of the building out of which WNYC and WQXR broadcast, it is home to many live events, like concerts, film screenings, art exhibits, and live tapings of radio shows.