Over the past three weeks, audiences in San Francisco, Chicago, Ann Arbor, and New York have had a chance to see Michael Tilson Thomas lead performances by the San Francisco Symphony.  Tomorrow night, it’s your turn! At 9 pm, PBS’s Great Performances will broadcast the opening performance of our Centennial season–a chance for all of you following Mavericks from home to see the SF Symphony and Michael Tilson Thomas up close and personal! 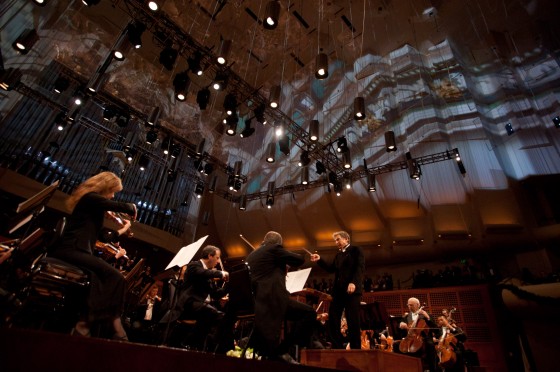 The American Mavericks Festival is just one part of a season-long celebration of the Symphony’s 2011-2012 Centennial Season, which opened this past September with a gala performance that featured not just Lang Lang performing Liszt, but also Itzhak Perlman performing Mendelssohn and Britten’s Young Person’s Guide to the Orchestra.  The Maverick spirit is there too, with the Ballet Suite from Copland’s Billy the Kid and John Adams’ Short Ride in a Fast Machine rounding out the show.  The concert broadcast is hosted by Bay Area author Amy Tan, and also features footage from throughout the Symphony’s history woven in with the music.

For more MTT, tune in to PBS tonight at 8 pm to watch performances by the New World Symphony of The Thomashefskys, a tribute to his world-famous actor grandparents (he spoke about it on NPR’s Fresh Air yesterday), and the rare opportunity to hear MTT sing a show tune!  Or, check out KQED’s Facebook and Twitter feeds–MTT has taken over and is updating from Carnegie Hall all day before tonight’s American Mavericks performances!