Some great reviews are coming in of the first concerts in the American Mavericks Festival:

“After weeks of build-up, the American Mavericks Festival opened Thursday night at Davies Symphony Hall. It delivered what Michael Tilson Thomas has been promising: to connect the dots through a century’s worth of music that somehow defines an American sound — in-your-face, yet poetic, an audacious sort of vision. It isn’t a scientific definition, but you can feel what he means… [Of the Harrison Concerto for Organ with Percussion Orchestra] It sounds like Messiaen sat down with Sun Ra, took some LSD, then traveled to Bali, jamming out with a gamelan orchestra and ceremonial drum corps. Thursday, under Tilson Thomas’s direction, there were eight percussionists on stage, creating a crisp forest of sounds — golden, breezy, hip-swayingly tropical, with gentle bonging sonorities coming from un-pitched percussion instruments invented by Bill Colvig, Harrison’s late partner.”
– Rich Scheinin, San Jose Mercury News 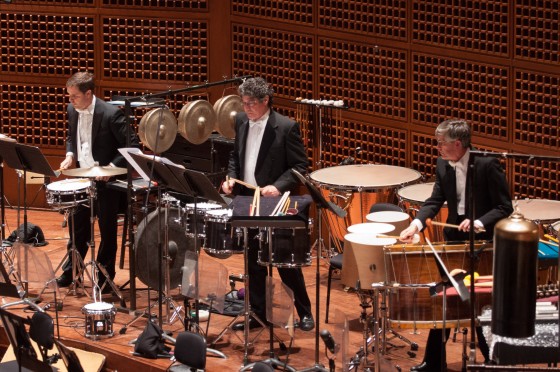 “Mavericks Festival starts with a triumph!.. If the performances — brash and often breathtaking — were any indication, Bay Area music lovers are in for an exciting 10 days.”

Her review of Harrison’s Concerto for Organ with Percussion Orchestra:
“In between, there was Harrison’s glorious and witty Organ Concerto, with the great Paul Jacobs as soloist. Nine years after the composer’s death in 2003, Harrison remains a bona fide Maverick — one of the 20th century’s most original composers, and a defining voice in the music of the West Coast. The concerto is simply a marvel. The work is scored for organ, piano, celesta, and percussion battery — drums and bells, temple blocks and glockenspiel, chimes, gongs, plumbers’ pipes, and more, with some of the instruments designed by Harrison’s partner, the late Bill Colvig — and the composer’s fascination with Indonesian gamelan is everywhere in evidence. Jacobs, often acting like a percussionist (among other techniques, he employed a padded bar to depress all the keys of an octave at once), is an outstanding soloist in any repertoire, and he outdid himself in this performance, as did the Symphony’s percussionists, pianist Robin Sutherland, and Marc Shapiro at the celesta. As Thomas summoned the music in gorgeous waves, the spirit of the original “Mavericks” filled the hall once again; as the performance concluded, the conductor kissed Harrison’s original score and held it aloft.” 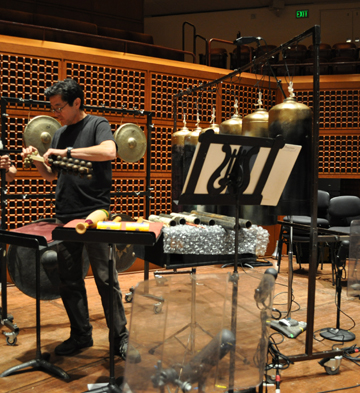 “Joyful and somewhat pugnacious clangor, after all, is an essential part of the American experimental tradition in music … Those qualities and many more infused the great “Concord Symphony,” which returned to Davies for a thrilling reprise after its local premiere in 2010. The “Concord” Sonata, Ives’ world-encompassing piano finger-buster, was turned into a symphony by the late Henry Brant, and it plays superbly in its new orchestral guise … Ives’ rhetoric veers wonderfully from the world-shaking to the intimate to the spiritual, making room along the way for marches, hymn tunes, grand bursts of cacophony and plentiful citations of the main motif from Beethoven’s Fifth Symphony.

“That stuffed quality, as well as the amazing virtuosity and resourcefulness of Brant’s orchestration, is what makes the “Concord Symphony” such a whirlwind of delight. Things come at you from all sides – often trampling one another in the mad rush – and hearing these strains spread throughout a large orchestra lends the piece an invigorating 3-D quality.

“It’s also a challenge for the conductor to keep all those elements in place, and Thomas, a past master of Ives’ own orchestral music, led a dazzling account of the piece. The big full-bore effects registered thunderously but cleanly, and the gentler aspects of the work – the tender chorales studding the “Hawthorne” movement, the air of homeyness suffusing the Alcott parlor – came through with winning grace.”