The newest maverick on this year’s American Mavericks festival is Mason Bates.  An Oakland resident, Mason has created his own voice by writing music that is not only fun to play but fun to listen to by incorporating electronic elements into his orchestra textures.  He’s this year’s Project San Francisco resident composer here at the SFS, and is also the Chicago Symphony’s Mead Composer in Residence.  They just paid Davies Symphony Hall a visit last month, and while they were here performed Mason’s new piece Alternative Energy.  The music was like static electricity running from players to audience and back, and there was Mason in the percussion section, using his laptop to sync audio samples he took at a particle collider with his orchestral textures.

The American Mavericks Festival features the world premiere of a work the SFS commissioned from Mason, inspired by a different realm of the technology world—communication.  “Mass Transmission tells the true story of a distantly-separated family communicating over the earliest radio transmissions.  It is a kind of 1920’s-era Skype: on one end of the line is a Dutch girl sent to be a page in the colonial government of the East Indies — and on the other end of the line is her mother, thousands of miles away in the Dutch Telegraph Office.  Scored for chorus, organ, and electronica, the piece intimately examines the warmth of human emotions pulsing through a mechanistic medium,” says Mason over on his website. 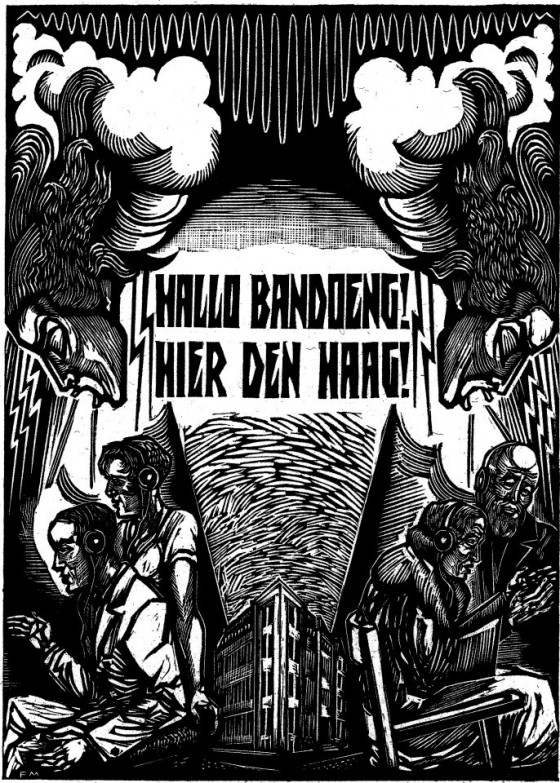 Found on Mason's Facebook page: an etching from the 1928 book "Hallo Bandoeng, hier Den Haag" (meaning "Hello Bandung, here in The Hague") that chronicles the first radio transmissions from Radio Kootwijk in the Netherlands to the East Indies.

In the video below, Mason talks about being in the audience at the first American Mavericks festival and a little bit more about composing the piece.  You can see Mason performing live in Mass Transmission’s premiere on March 15-17 in SF, March 22 in Ann Arbor, and March 29 at Carnegie Hall.

Following the performance at Davies Symphony Hall on March 16, see Mason and his electronica up close as his nighttime alter-ego, DJ Masonic, performs at Davies After Hours.  Come up to the Second Tier, have a beverage, see art curated by The Crucible (I’ve heard rumors that there will be some pretty wild plasma art on display), and maybe even do a little dancing to beats provided by DJ Masonic and guest musicians.  Free to all March 16 ticket holders.