This weekend at the SF Symphony means the world premiere of not one, not two, but THREE new works by maverick composers.  There are the first performances of Mason Bates’ Mass Transmission and John Adams’ Absolute Jest, and on Sunday at 2 pm Meredith Monk, her vocal ensemble, and members of the San Francisco Symphony will be performing the world premiere of her new work Realm Variations. Monk and her ensemble also perform Realm Variations March 25 in Ann Arbor and give the New York premiere at Carnegie Hall on March 30.

Meredith Monk wrote the piece for SF Symphony piccolo player Cathy Payne.  They’ve been rehearsing together all week, and the music is beautiful.  Meredith is known for using her voice in extended ways, making it seem more like an instrument, and using the movement of her body, which makes the blending of sounds with the piccolo and other instruments very warm and colorful.

In this video, Meredith talks about what it was like to write for a piccolo, and Cathy describes why she was interested to play Meredith’s music:

And here they are rehearsing at Davies–Meredith is in the center and Cathy Payne is at the far right. 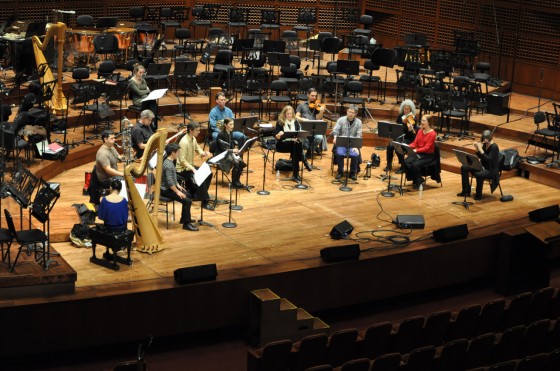