It’s hard to imagine what music today would sound like without electronic music.  The proliferation of the use of electronics has given us the live looping via foot pedal of cellist Zoë Keating, Mason Bates’ addition of ‘laptop’ to the roster of orchestral instruments, and for better or for worse, Autotune.  Over the past forty years or so, electronics have exploded the possibilities and tools at every musicians’ fingertips. Many of those advances originated in the Bay Area, and composer Morton Subotnick was one of the pioneers. The Orchestra and vocalist Joan La Barbara (Subotnick’s wife) performs his Jacob’s Room: Monodrama (2012) on the American Mavericks tour.

Subotnick was a founder of the San Francisco Tape Music Center, and one of the first writers to include multimedia elements alongside traditional orchestra instruments.  He even helped Don Buchla create his Buchla Music Box, one of the first synthesizers. 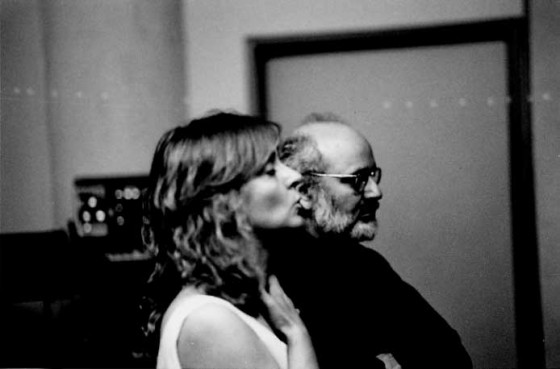 From Subotnick's website: a photo of Joan La Barbara and Morton Subotnick recording the original 'Jacob's Room' in Los Angeles, 1986

Jacob’s Room began as a work for the Kronos Quartet and La Barbara in 1985.  The piece is about holocaust, both the actual event during World War II, and in terms of the destruction of humanity.  Subotnick says, “The basic notion of Jacob’s Room is that holocausts are not just local catastrophes; they also gradually destroy the thin fabric we have of being human. They deprive us of the artifacts we have created and our empathy as a group. When these things fall apart, we find ourselves alone in the universe.”

The piece has evolved through several versions, from the 1985 original all the way to a full opera with video projections (La Barbara details all of these versions in a recent interview).  For American Mavericks, Subotnick created a new version–a “monodrama” for solo voice, string quartet, electric keyboard, and electronics.  La Barbara uses three microphones to throw her voice into the far corners of the hall, to both depict the different characters in the piece and to use the spaces of the hall as a kind of surround-sound.  This new commission was premiered by the San Francisco Symphony in San Francisco on March 11; it will also be performed by La Barbara and the Orchestra on the American Mavericks tour on Sunday, March 25 at 4 pm in Ann Arbor, and on Friday, March 30 at 8:30 pm at Carnegie Hall in NYC.