It’s not every day that you get to hear a sneak preview of a new piece of music by a great living American composer—unless you work at the SF Symphony during American Mavericks! Today, the St. Lawrence String Quartet is in the house, rehearsing the piece the Symphony commissioned from John Adams for the Mavericks festival—it will be premiered this weekend, March 15-17, in San Francisco, and on tour in Chicago on March 21, Ann Arbor on March 23, and at Carnegie Hall on March 27.  The piece is called Absolute Jest, and is woven through with elements of Beethoven.  Listening in on the rehearsal, I heard Beethoven’s descending fourths from the Ninth Symphony, but used in Adams’ unique voice.   Here is the St. Lawrence string quartet, the resident ensemble at Stanford, getting ready for the performances with John Adams and MTT: 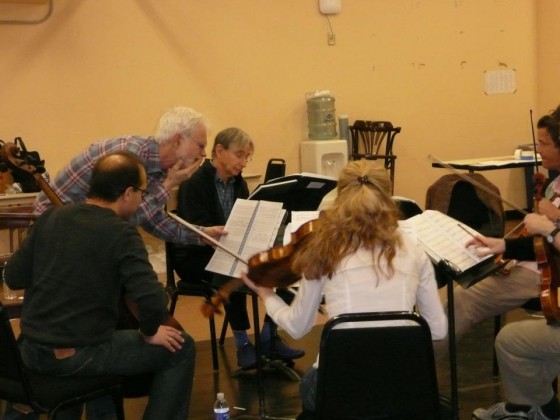 It’s kind of unusual to have an entire string quartet as soloist.  It’s not quite a concerto, but they’re definitely not just playing along with their corresponding orchestra sections.  The members of St. Lawrence, Geoff Nuttall, Scott St. John, Lesley Robertson, and Christopher Costanza, play their parts more in conversation with the larger orchestra, interspersing the intimacy and virtuosity that is so characteristic of Beethoven’s chamber music in with the muscular SF Symphony.

The St. Lawrence String Quartet encircles MTT onstage. They’ll be back at Davies next season to record Absolute Jest on SFSMedia.  And, in the race for the festival’s Most Vibrant Shoes, we have a tie: Geoff Nuttall and MTT! 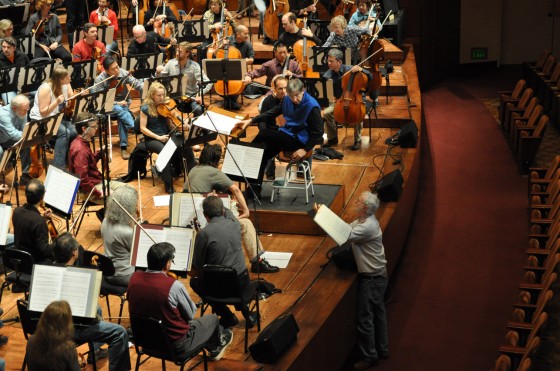 And, to check back in on the SFS percussionists (pictured are Jack Van Geem, left, and David Herbert, right), who are getting a workout during Mavericks: 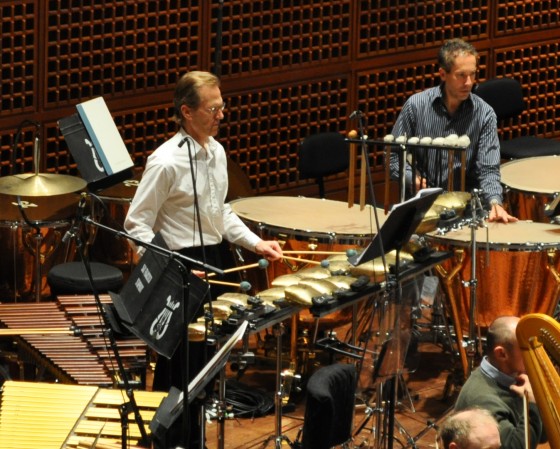 Is this enough cowbell?